Celebrating a birthday and anniversary for women’s rights. Can you guess what and who?

Celebrating a birthday and anniversary for women’s rights. Can you guess what and who?

A woman who hears me read the Bible aloud every week told me she was born in 1926. I thought,”wow”, that was 6 years after the 19th amendment to our constitution was ratified giving women the right to vote. This right had rarely crossed my mind during my younger years because it didn’t occur to me that there was a time when women couldn’t vote.

The women in my family were always feisty, independent and oftentimes a little rebellious. I was encouraged to form my 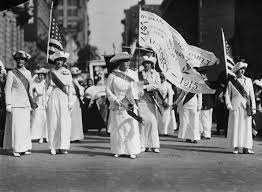 own opinions, though once I did, I felt that everyone would have been happier If I didn’t because often it conflicted with their point of view.

I am constantly praying and following the inspiration I receive from God. After a prayer on how my talents could be best used next, I met a woman in a business meeting who was telling those of us at her table that she reenacted Elizabeth Cady Stanton in a one woman show. I had many questions for her and expressed an enormous amount of enthusiasm about her performances.

I told her how much I enjoyed theater and had trained as an actress in New York City.  She turned to me and exclaimed, “would you join my presentation and reenact Susan B Anthony?” “Yes,” I said with great excitement, because I knew that this was a Divine connection that would lead me to my next “calling”.

Thus began my research into the suffragette movement.  If you are a history buff or supporter of the women’s movement, then the following facts will be no surprise to you. This year not only are we celebrating a woman’s right to vote, but it is 200 years since the birth of Susan B Anthony.

Susan was a social reformer and women’s rights activist. She didn’t start out as a suffragette but as an activist in the Temperance and abolitionist movements. Once she met Elizabeth Cady Stanton, she dedicated her life to equal rights for women. She intuitively knew that without a woman’s right to vote these other topics she spoke about may not gain the support needed.

There was nothing easy about being a suffragette. Women often were thrown in prison, fined and went on hunger strikes.

If you lived in those times, what would you have done?

Is the right to vote important to you?

Do you remember the first president you voted for and what year it took place?

Here’s a quiz to test your knowledge on the suffragette movement;

Want to share your score? Email me at: askamazinggrace@gmail.com

Jenny Morris has a BA degree in social work, and added the most important element, God, as the ultimate healer. How could any difficulty be resolved without prayer for the right solutions?

Jenny has spoken at a variety of national, international and local conferences throughout the years. She especially loves uplifting others through her engaging presentations laced with stories from the Bible, making them highly relevant and interactive with contemporary subject matter.

For more information or to sign-up for her newsletter, visit: https://jennygracemorris.com/clarify-your-calling-gift/